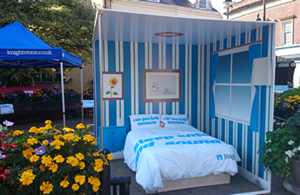 Printing a mobile Bedroom is certainly an eye-catching display for the high street. This freestanding cube, about 10ft square, had printed graphics on the back and one side wall to look like a bedroom, including wallpaper and a window with curtains, and the exterior printed with social media information.

HALO Media are a strategic branding, advertising and media agency who were working with Knightstone Housing to raise awareness of their Emergency Host Family Accommodation scheme.

Knightstone Housing Association is a leading housing provider in the South West who own and manage over 11,000 homes across Somerset and the West of England, and provide a range of supported housing programmes.

Knightstone is part of a partnership called Pathways to Independence (P2i) which works to prevent homelessness amongst 16-24 year olds.  As part of this, they run an Emergency Host Family Accommodation scheme which provides emergency accommodation for single young people who find themselves homeless.

To promote this scheme, HALO media helped to create a campaign called #sleepsafe to highlight youth homelessness in South Somerset.   As part of this campaign they wanted to create a film to discuss and raise awareness of the issues.

They approached Hobs to help them create an unusual display stand to act as a backdrop for their promotional film and social media campaign. This focal point needed to look like a bedroom, but would need to be built in the middle of Yeovil high street.  This would highlight the contrast between sleeping in a bedroom versus sleeping on the street, whilst also attracting attention to all the passers by and raise general awareness of the campaign during the filming process.

Working with HALO and Knightstone’s brief, Hobs Bristol proposed a large freestanding cube, about 10ft square, that would have the back and one side wall intact.  The interior would have graphics printed onto them to look like a bedroom, including wallpaper and a window with curtains, and the exterior printed with social media information and Knightstone branding.

Both parties loved the idea and after worked on the artwork Hobs created a visual for final approval, which is shown here.

This was quickly signed off and, after working out how it would all fit together, the room was printed onto large pieces of ‘Falcon Board’ using a large flat-bed printer, which can print onto most flat materials.

A test run build was completed in a community centre as it was the only place that was big enough to set it up.  After a few minor tweaks the mobile bedroom had been completed!

“Hobs went the extra mile for us on this project as they so often do: advising on the original, printed weatherproof gazebo which was perfect for our requirements and turning up early on the day to help our client put the gazebo up and explain how to dismantle it at the end of the day. A massively helpful service, thank you!” Michaela Wilson, Account Director, HALO Media.

“The room was a great edition to the project – it brought it all together really well (i.e. the pillows wouldn’t have worked half as well without it!) It was very eye-catching which is what we needed. The service was great as well – Hobs had all the stand up before we arrived with the rest of the stuff, and they were very enthusiastic about what we were doing.” Lauren Haasz, Knightstone Housing.

The stand succeeded in raising awareness of the issue with coverage on BBC Points West on both the breakfast and evening show.  The resulting video, which uses the bedroom set and printed items can also be seen here:  http://youtu.be/SYDOKyIdEb4  #sleepsafe