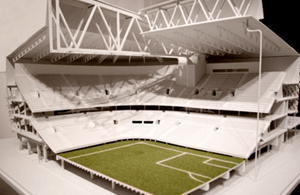 Whilst most of us were probably enjoying our cereals or toast, Michelle Greeff, Director of 3D technologies at Hobs Studio was chatting to Chris Evans on BBC Radio 2.

Whilst most of us were probably enjoying our cereals or toast, Michelle Greeff, Director of 3D technologies at Hobs Studio was chatting to Chris Evans on BBC Radio 2.

The Chris Evans breakfast show is the UK’s most listened to radio show with over 9.91 million listeners tuning in each week, giving the show the biggest audience recorded in the UK since the current measurement methods were launched 15 years ago.

Michelle appeared as the ‘Mystery Guest’ on the show on the 23rd of October. This slot is where host Chris Evans conducts a three minute interview without any prior knowledge of the subject and guest. Michelle was introduced with a fanfare as the “Princess of Printing and a Leading Lady of Lasering” before Chris excitedly chatted away and expressed his genuine fascination for the subject.

Michelle explained the various things that Hobs were 3D printing, including items for architects, artists, product designers, Formulae One car parts and even the head of Happy Mondays star Bez, as detailed in another story.

The interview went on to discuss scanning and 3D printing peoples pets and the different materials that you can 3D print in.

When asked if she had ever 3D printed herself, Michelle confessed that she had been scanned, but that “it felt too weird” to actually 3D print herself. However, she did admit that she’d 3D printer a lemon squeezer to use at home.

Chris closed the interview by saying “This is the future!” We couldn’t agree more!

For more information on the range of 3D printed items, visit the Hobs Studio website.

Source: Listenership figures according to the Rajar figures for July 2014. The Chris Evans Breakfast show is weekdays from 06:00 to 09:30 on BBC Radio 2.