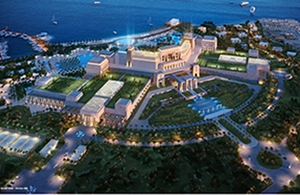 WATG had created an ambitious design for a hotel in Ras Abu Abboud, Doha, Qatar. They wanted every aspect of the presentation to help their client to buy into their ambition, so getting the best quality of print was paramount. There was a very quick time-frame to print and deliver the boards so they could catch a plane.

WATG are a multi-national, award-winning architectural practise who are recognised for their architecture, interior design and planning for high end hotels and luxury destinations.

A presentation of printed boards is a standard part of WATGs workflow, and something they provide their clients at key stages of design projects.

WATG had created an ambitious design for a hotel in Ras Abu Abboud, Doha, Qatar.  They wanted every aspect of the presentation to help their client to buy into their ambition, so getting the best quality of print was paramount.

The task was to produce twelve A1 display boards as well as three large concept boards which had to be printed and hand folded.

The date of the presentation had been moved forward so the deadline was very tight for the design team.  To allow as much time as possible for the designers, it was agreed that the smallest window for the printing would be for the artwork to arrive at 8am, but everything had to be delivered before midday as the clients had a plane to catch.

For the printing a 260gsm Satin stock was chosen to emphasize the accuracy of the images and detailing.  A HP Z-series inkjet printer was used to give the best results in the timeframe.  The resulting prints were mounted on to 5mm polyboard and sealed for added durability.

The design of the large concept board measured 800x2400mm, which would be too big to ship on the plane, so a different approach was taken.  This design was printed then folded down to a size of 400mm square.  180gsm ‘Smart Matt’ paper was chosen as this gives crisp folds but remains robust when folded and doesn’t crack.  Two pieces of ‘Polyboard’ were then cut to the same finished size and placed on the outer faces of the folded document to create a protective cover.  This meant the printed concept was safely sandwiched between the two boards, but could be easily unfolded when it reached its destination.

The boards and concepts were in plenty of time to catch the plane to Qatar.

WATG were delighted with both the result and turnaround as they knew this was a large job to be turned around in such a short space of time.

Bradly, from WATG, remarked “Very impressive, very grateful.  Hobs have proven time and time again that our confidence to get jobs turned around swiftly and at the highest quality is rightly placed.”