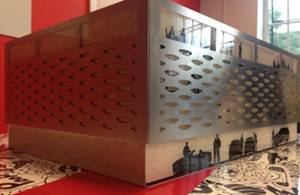 Balfour Beatty were creating a tender response for the National Automotive Innovation Centre (NAIC) project valued at approximately £68M. As the building was to be a centre for Design and Innovation, they asked Hobs to help them reflect this by creating a tender submission box which was both visually pleasing and which demonstrated innovation and forward thinking in its design.

The National Automotive Innovation Centre (NAIC), is an exciting joint venture between the University of Warwick and Jaguar Land Rover (JLR).  Balfour Beatty were creating a tender response for this project which they had identified as a high priority and was valued at approximately £68M.

As the building was to be a centre for Design and Innovation, Balfour Beatty wanted to reflect this by creating a tender submission box which was both visually pleasing and which demonstrated innovation and forward thinking in its design.

A concept design and mood board was created for Balfour Beatty.  The concept was to create a box which resembled the materials the finished building would use.  This would be achieved by creating a Perspex box and reverse printing, on the inside of the box, with a representation of the building.  This would reflect the glazed look of the building and by printing layers and small people, would give the illusion of activity inside the building.  A lid would be formed out of profile cut aluminium, which would match the proposed building’s façade.

To further show innovation, the box would contain and iPad and an app as an electronic version of the tender response document.  This would also include a video animation of the proposals, along with three virtual reality apps, which were created from stills of the building, bringing the building to life.

Richard Ayres, Balfour Beatty, commented “The tender response hit the nail on the head.  Having to work with just one other organisation (Hobs) really aided communication and the level of understanding during this project.  We set off to show innovation and that’s exactly what we did”

Every part of the tender response was designed and created within the Hobs Group, using the text and technical information provided by the client.  Hobs Reprographics completed all the document printing, customer printed dividers and folders, the laser cutting of the aluminium lid, the printing and forming of the Perspex box, plus the custom cut foam to hold everything in place.  The CGI video and animation were created by Hobs Studio, and these were combined into an iPad app by Hobs Creative.