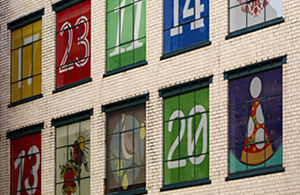 True North wanted to transform their building into a giant advent calendar, using window vinyls to simulate the windows of an Advent calendar. This would show off their creativity as well as creating intrigue passers by. Each window in the building has 9 panes of glass, meaning that 434 printed vinyl panels were required to complete the project.

True North is an award winning branding company based in central Manchester. In 2015 they moved in to new office space at 24 Lever Street in Manchester; six floors of Victorian architecture full of some of the North’s finest creative minds. In keeping with tradition the newest tenants were asked to create a Christmas card for the building. They came up with the idea of creating a giant advent calendar, using the windows of the building as the windows of the calendar.  This would show off their creativity as well as creating intrigue and excitement for passers by, hopefully generating sustained interest and buzz.

True North wanted to work with as many different designers as possible to bring this project to life, so it was decided that the different images should be created by different clients and partners.

To make the advent calendar work, all the windows would initially need to be filled with giant numbers.  Every day a new window would be ‘opened’, and the number would be replaced with an illustration. This meant that two window vinyls would be required for each window; one featuring the date and one with the illustration.

Each window in the building has 9 panes of glass, meaning that 434 printed panels were required to complete the project. As the calendar would cover one side of the building, the team wanted to ensure people could still see out, so the window vinyls had to be translucent.

As this project would need to be updated every day for a month, the panels needed to be as easy as possible to change; this required the ability to stick them on the inside of the windows to be seen from the outside.

Finally, to help raise money for charity, it was decided that hard copies of the festive images would be available to purchase through the website.

Hobs Reprographics were asked to print the many different window vinyls to create the dates and images for the windows.

The material chosen to print on was a clear polymeric through-vision vinyl. This material was chosen for a number of reasons.  Firstly, it would allow the people inside the building to see out, but anyone outside would see the design clearly.  This material would also be easy to remove for the daily image changeover, without leaving glue residue on the window.

The printed panels were reverse-printed onto the back of the clear material using an Arizona flat-bed printer.  The image was printed onto the material first, and then the back flooded in white to make the images more vivid.

The panels were then cut to size and the number panels were put into position for the start of December.

The calendar was a great hit with all the designers involved and also with the people of Manchester! The feedback, especially on social media, was very positive and praised this amazing project.

Everyone who walked past would stop and look in surprise at the beautiful illustrations as they were revealed, whilst increasing numbers of people came specifically to see the calendar and take photographs as each day was revealed.

Calandra Pavey from True North commented “This was a fantastic and unifying project that really did help spread festive cheer in the Norther Quarter. It allowed True North’s voice to be heard whilst showcasing the work of some of Manchester’s finest creative minds. Moreover, we raised money and awareness for the Wood Street Mission charity.  The help and advice from Hobs was greatly appreciated. We definitely couldn’t have done it without them!”

Adrian Newell from True North added “With this project we needed someone with in-depth material and production knowledge, who we could rely on to get everything up and running in an incredibly short time-period. Prints had to be turned around quickly and efficiently and Hobs enabled this, providing expertise and support every step of the way, they were also willing to go the extra mile and help us with the installation. The completed calendar looked incredible, and was trending in no time, we could not have been happier with the result.”

Many art posters of the festive designs have been sold for the Wood Street Mission charity.