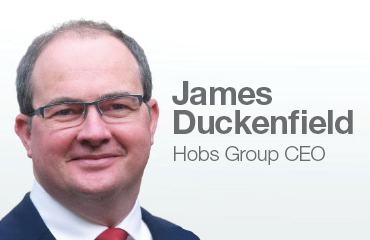 "I want to thank everyone within the Hobs Group for their continued support and commitment over the last twelve months. We’ve faced some challenges but there have been a great deal of achievements made across the whole group."

I want to thank everyone within the Hobs Group for their continued support and commitment over the last twelve months. We’ve faced some challenges but there have been a great deal of achievements made across the whole group.

Hobs 3D’s services are getting bigger and better – our 3D London team broke a record this year when they created the largest master plan model in the UK. At 3D Manchester, the team have made the exciting move to a larger facility, which was officially opened by the Mayor of Greater Manchester.

In Hobs Repro, advanced wide format machines have been installed in both our Leeds and Glasgow branches. We have also installed new Indigo presses in Manchester and Birmingham. Our Warrington branch has relocated to Birchwood Park, in the heart of the nuclear industry, fully equipped with state-of-the-art facilities, resulting in a significant improvement in revenue. We acquired Face Creative Services who are now very much part of the London family. All of these investments have allowed us to extend our range of services to both existing and new customers.

In Anexsys, the acquisition of K2 Legal Services has been completed and fully integrated into the business. The team have also developed some powerful intellectual property and secured a place on the government eDisclosure framework. We are very proud to be recognised for our services to the public sector.

There are many exciting plans being worked on within the Group. We will be moving the Hobs 3D London facility to Here East; what was the Olympic media centre, alongside many high-tech organisations. This will give the business capacity for growth. We also have a number of acquisition discussions underway and are currently formulating our plans to expand our scanning business in Repro.

The Business Growth Fund have invested a further £4.1m into the Hobs Group which brings the total investment up to an incredible £11m. We look forward to the bright future ahead as the company continues to grow nationwide.

On behalf of the Hobs Group, I hope you have a lovely Christmas and enjoy some well-earned rest with your families. I look forward to working with you in the New Year.