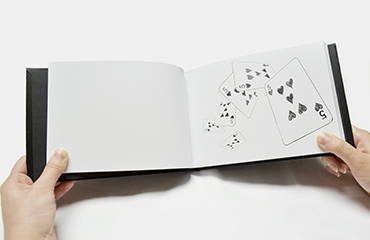 Dynamo is a magician best known for his award-winning television show Dynamo: Magician Impossible. We printed some extra special books that were used in the magical performances.

Dynamo is a magician best known for his award-winning television show Dynamo: Magician Impossible.  He recently took to the stage in a sell-out tour around UK arenas, with a breath-taking collection of magic.

We have to be careful with what we say (being careful of the magicians code), but we printed some extra special books that were used in the magical performances.  The books were flick-books, with Dynamos sketches on each page.  Flicking through the book created an animation of Dynamos show, and the different tricks performed that night.

At the start of each live performance, a member of the audience secured a book in a bespoke box, again made by Hobs Reprographics.  At the end of the show, the book was revealed to magically contain specific images that related to a whole series of random events from that night!

The books were also featured on TV as the O2 arena show was filmed.  Because of this, a matt paper was chosen for the book, so the cameras could easily pick up the details of the pages.

A few members of the Hobs team went to see the live show, and to see their books in action.  The unanimous feedback was “Dynamo is just Amazing!”

If you have a special printing project then we’d love to help, so just get in touch!