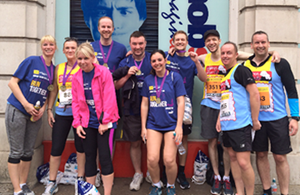 Pictured are the exhausted Manchester Team who ran 10k each to raise money for Children with Cancer UK. The Hobs Team raised £1204 and smashed their fundraising target.

Ten of the Hobs Manchester team ran 10k each to raise money for Children with Cancer UK.

Children with Cancer UK is the leading national charity dedicated to the fight against childhood cancer. Their aims are to determine the causes, find cures and provide care for children with cancer.

The Great Manchester Run took place on Sunday 10th May and is Europe’s biggest 10K running event and has seen more than a quarter of a million enthusiastic runners take to the streets of Manchester since the run was established in 2003.

After starting near Manchester Town Hall, the course passed Manchester United, the Coronation Street set and the Imperial War museum, before finishing on Deansgate, just outside Hobs Deansgate!

The team was made up of members of the Hobs Studio Manchester, plus members from the two Hobs Reprographics branches, Hobs Dale St, and Hobs Deansgate.

The event was broadcast live on BBC TV and the Great Manchester Run raised over £22 million for charity.  The Hobs Team hope raised £1204 and smashed their fundraising target, but you can still support them with a donation at: https://www.justgiving.com/HobsStudio