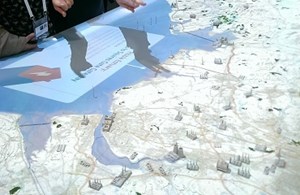 Showing the power of new 3D technologies and large digital printing at the international festival of business.

3D printing, from 3D specialist Hobs Studio in Manchester, has played a key role in the production of the largest ever contour map of the North West, which is the key attraction of the International Festival of Business (IFB), on display at Mann Island in Liverpool throughout July.  The spectacular 3D map is perhaps the most ambitious planning project yet for engineering and design company, Arup. It was produced for their client Alan Torevell, to illustrate his innovative North West Squared proposals to produce renewable energy through tidal gateways along the North West coast.

Filling the biggest exhibition space available at the IFB, the 3.4m x 1.6m physical model covers hundreds of square miles of an area from north Wales to north of the Lake District and from the west coast to the Peak District.  It also features 139 3D printed models of renewable energy sources in the North West, including nuclear and coal power stations, wind farms, solar PV panels, waste incinerators, biomass processing plants and hydro turbines.  To help with orientation, there are also 10 highly intricate 3D printed models of famous North West landmarks, including the Blackpool Tower, the Beatham Tower in Manchester and the Three Graces buildings in Liverpool.

The project is then brought to life by overhead projectors, from Manchester based The Neighbourhood, which beam video footage and digital images onto the map to show the movement of the tides on the tidal gateways, creating a unique multi-sensory experience.

Commenting on the model, Andrew Conley, 3D Production Manager of Hobs Studio says, ‘We were delighted to be involved in such an exciting project which is breaking the boundaries of traditional architectural planning. This project has combined the best services from across the Hobs Group portfolio.  The power of our 3D printing in Manchester, has been teamed with the accuracy of our large digital printers, laser cutting, and traditional model making techniques.

‘This unique combination of services has made it possible to 3D print the landmarks and energy sources, as well as laser cut the map contours themselves, in just two days.  In contrast, it would have taken up to two weeks to do the same thing using traditional model making techniques, which has saved both time and money.’

Simon Mabey, Senior Designer of Arup comments, ‘We are delighted with the finished model and the reaction from our team and visitors has been tremendous.  By working with Hobs Studio we’ve created a very special model that’s highly accurate, informative and visually stunning.’ 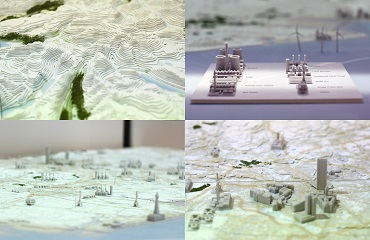 The model will have a life after the exhibition; created by the Leeds based Equinox, the stand for the model splits into eight sections.  This enables the model to be divided and so the relevant models can be used in different parts of the region as required.