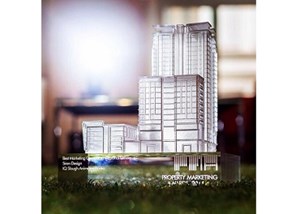 Hobs Studio, London, were asked to design and create a memorable and recognisable trophy for the prestigious Property Marketing Awards (PMA).

Hobs Studio, London, were asked to design and create a memorable and recognisable trophy for the prestigious Property Marketing Awards (PMA), which celebrate the very best in the property marketing industry, from innovation and creative brilliance to campaign effectiveness.

“One of the many challenges with an annual awards event, is to find a trophy that is distinctive and that winners will be proud to display, and even collect if they are successful!” Says Colin Peacock, PMA Chairman.  “It’s even more important when the awards in question are recognising creativity; I believe we’ve definitely achieved this for PMA 2014.”

“The award has the wow factor and was a huge standout hit with all the recipients on the night.  We were delighted to be able to showcase the latest rapid prototyping technology which is able to produce accurate and detailed scaled models for the construction industry – both with the awards themselves and with a working demonstration for our guests on the night.”

As shown in the pictures, the awards are a transparent building which were 3D printed on the Hobs Studio’s SLA machine, the largest in the UK.  This equipment uses a laser to build layer-upon-layer of transparent resin, until the final shape is achieved and creating a very smooth finish.  Hobs Studio has also created other 3D printed awards in shapes as diverse as robots and even penguins; with 3D printing the possibilities are endless!

Kadine James, Business Development Manager at Hobs Group, commented “We’re thrilled to have been part of the PMA ceremony and the feedback from the recipients has been overwhelming.  All the recipients have been proudly tweeting pictures of their awards and it’s great to know that our 3D printing is displayed in the offices of the UK’s top marketing agencies.”

The PMA’s are organised each year by the Worshipful Company of Chartered Surveyors in partnership with Estates Gazette.  This year’s ceremony was held at BAFTA, London, on the 27th June and was hosted by TV presenter Katie Derham.  Leeds based development company, Citu picked up the top prize for their Little Kelham scheme.

Colin adds “Now in its 22nd year the Property Marketing Awards were once unique in the industry.  They have had to move with the times, as technology changes in the marketing industry on an almost daily basis. No longer is a brochure with beautiful pictures of buildings sufficient for a winning campaign.  I hope that PMA’s relationship with Hobs Studio will be a long one – they are at the cutting edge of new technology and that is where PMA aspires to be.”

To see highlights of the winners collecting their awards visit: http://www.egi.co.uk/news/784232.nw